Home » Go easy on me – Stonebwoy reacts to Putuu criticisms 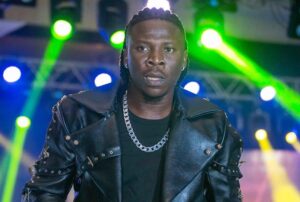 Dancehall artiste Stonebwoy is asking Ghanaians to go easy on him with criticisms about his latest song Putuu.

The release of Putuu two weeks ago has divided the industry; while some players believe it is great even if not characteristically Stonebwoy, others have totally trashed the song with some calling it senseless.

However, in an interview with Graphic Showbiz on Thursday, July 23, Stonebwoy said he was just exercising his creativity and asked Ghanaians to ease their stress with the track.

“Actually Putuu is a song to ease people’s stress in these Covid-19 times while we remember to pray about the situation. I’m a very creatively gifted individual who is supposed to keep people’s hopes and moods uplifted in sad times,” he said.

Asked his view about those calling the song trash, the Sobolo hitmaker said everyone was entitled to their own opinion adding that a lot of people were also enjoying it.

“It is not everyone who will like your song. I don’t expect everyone to jump on the song but I know majority of Ghanaians and my fans worldwide are enjoying it big time.

“The song was a freestyle but it leaked and the public demanded it so we had to release it. Trust me I am surprised about the way it is flying so fast,” he said.

Stonebwoy has been around for the past 10 years and has released countless hit songs such as Baafira, Run Go, Sobolo, Nominate, Shuga, Ololo, Most Original, Go Higher, Kpo K3K3 among others.