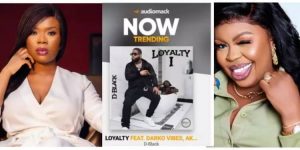 Afia Schwarzenegger and Delay shared their views about loyalty on D Black’s Loyalty Album, and fans want to know if the duo is back together as friends.

Desmond Kwesi Blackmore, popularly known as D-Black, has released an album after five years of not making active music. The album featured Delay and Afia Schwarzenegger expressing their views on what loyalty means to them on one of the songs.

Speaking on why he decided on such an explosive intro, D-Black said that the issue between these two ex-friends stems out of loyalty. He said, “Both people feel betrayed, and I wanted to have a conversation with them regarding loyalty in different aspects of their life. To see their take on loyalty.” He said both parties had no idea about his little project, but neither has commented since the song was released.

The ”Vera” hitmaker released the 12 track Loyalty Album on May 14, 2021. So far, it has garnered positive reactions from his fans.
D-Black hinted to MzGee on ShowBiz927 that He plans on having Delay and Afia Schwarzenegger as video vixens for the song.

Shall we expect a comeback of the two former best friends? Is it finally time for the two former friends to bury the hatchet and let bygones be bygones? Or is this just a song, and their relationship remain unresolved? Only time shall tell!