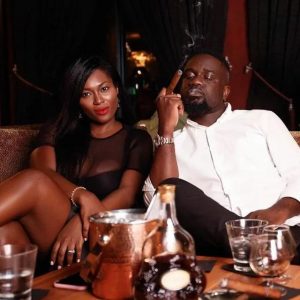 Social media users are shocked to the marrow after sighting their favourite musician, Sarkodie smoking.

Gentle looking Sarkodie has been captured smoking tobacco during an event which he attended with his wife, Tracey.

Social media users are apparently stunned by the photo as they’ve always seen Sarkodie as a cool decent dude, despite his arrogance.

Whilst some people think that King Sark may have been secretly smoking, others believe he’s smoking because he’s under pressure!

Sarkodie has recently caused a stir after reportedly misleading Kuami Eugene to endorse Akufo Addo in a campaign song titled ‘Happy Day’ after being paid by the NPP party.

Though he has tried to deny the claim, he not being honest and open to Kuami Eugene inflamed social media users as they fired him.

Shockingly Sarkodie smokes! Check out the photo below;