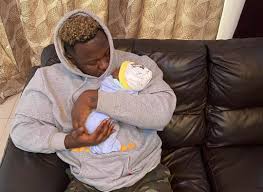 Ghanaian hiplife and hip-hop musician Medikal has revealed why he named his daughter ‘Island’.

he “Omo Ada” hitmaker sent social media into a frenzy when he unveiled his daughter’s name as ‘Island’ through his Instagram page.

“Welcome to the universe my queen! Island Frimpong. You no get problem, God got us,” Medikal captioned his first photo with his daughter, Island.

Reacting to comments that his daughter’s name is somehow weird, he explained on YFM on Monday that he gave her the name because she came from a different space – an island.

The former AMG Business label signee indicated that his daughter is special so he chose to game her that ‘beautiful name’.

Why I named my daughter Island is because I feel my baby is special and an Island is a land in the middle of water and I feel she came from a different space so I chose to give her that beautiful name ‘Island’” Medikal told YFM.

He said his upcoming extended play, dubbed “Island”, was named in honour of his daughter Island Frimpong.

The “Island EP” which is already out features youngsters like Kwesi Slay, Armani, Kevin Fianko, Ahtitude and many more.