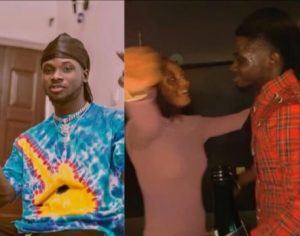 Versatile musician Kuami Eugene has been well celebrated by his fans, colleagues in the industry as his pictures have flooded social media.
Many are celebrating the award winning highlife musician with well wishes.

Ndwompafie.net have spotted a powerful message coming from Adjekai Prysy, a model, and entrepreneur who loves Kuami Eugene with all her heart.
In Adjekai Prysy’s birthday message to Kuami Eugene she revealed the strength of their friendship, and how the two have been friends for this while through their ups and downs.

Interestingly, Adjekai Prysy turned off comments under her post which have made many to believe indeed the two have something going on between them. But whatever the case, the truth will surely pop up one day and  Ndwompafie.net report to our cherish readers.