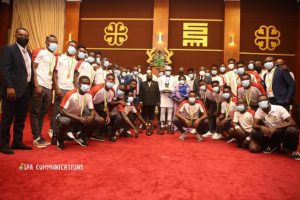 The Black Satellites team will pocket $350,000 as a cash reward for clinching the 2021 Africa U-20 Cup of Nations title in Mauritania.

This was made known by President Nana Addo Dankwa Akufo-Addo.

On Tuesday, the playing body, the technical team and the management team were hosted at the Jubilee House to present the trophy to the president.

The U-20 team won the trophy for the fourth time in their history following a 2-0 win over debutants Uganda on the country’s 64th birthday.

President Akufo-Addo announced that each member of the team will receive $10,000.

He, however, revealed that $5,000 will be made available to them now.

“We have a package for you which will enable you to receive the gratitude of the nation. It is a token but it’s something to tell you how very happy Ghanaians are with what you have done. Each one of the team is receiving $10,000 from the government.

“The decision has been made that the $10,000, you will get $5,000 of it in cash and $5,000 is going to be invested for you over the next 10 years so that you have something also to look forward to,” President Akufo-Addo told the contingent led by the Ghana Football Association boss, Kurt Okraku.

President Akufo-Addo also personally gave four outstanding members of the team $5,000 each. They are coach Karim Zito, captain Daniel Afriyie – whose two goals in the final secured the trophy, Ibrahim Danland – who was adjudged the best goalkeeper and the competition’s best player, Fatawu Isshaku.