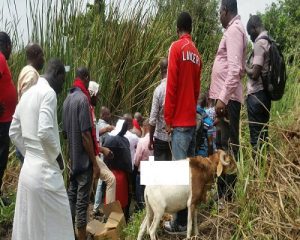 Ndwompafie.netis reliably informed that two executives of the National Democratic Congress (NDC) in the Banda constituency of the Bono Region who are skeptical about the fairness of the upcoming polls have invoked curses on all persons involved in plans of rigging the election.

The two believe that officials of the Electoral Commission have plans to rig the election by not stamping the back of the ballot papers at the strongholds of NDC and should be killed by gods of the Bono land.
In a video sighted by Ndwompafie.net, the supporters had a poster of the Presidential candidate of the National Democratic Congress [NDC], John Dramani Mahama and his vice, Jean Nana Opoku Agyemang on a wall where they invoked the curse.
The two executives presented eggs, schnapps and a black fowl to the gods to appease them and call them to action. Also, they asked the gods to kill all EC officials who will rub ink in their head and try holding the ballot paper that will result in rejecting the ballot paper and anyone who will try steal for candidate or stop eligible voters may the gods deal with you”
According to them, ” they brought black fowl to indicate their seriousness and promised to bring the gods a big white goat when they are helped to win the elections”.
To the two NDC executives, they asked that, “we are fair in their dealings and whoever steals in this election in Kumasi, Dorma Central, Dorma East, Dorma West should die and whoever will accept double ballot paper to vote should also die”.
A little over 17 million eligible voters are expected to cast their vote in today, Monday December7, 2020’s general elections which will elect the next president for Ghana under the fourth republic as well as 275 members of parliament.
Watch the video below.

HOT VIDEO: Dr. Okoe Boye In A Near Street Fight With Constituents